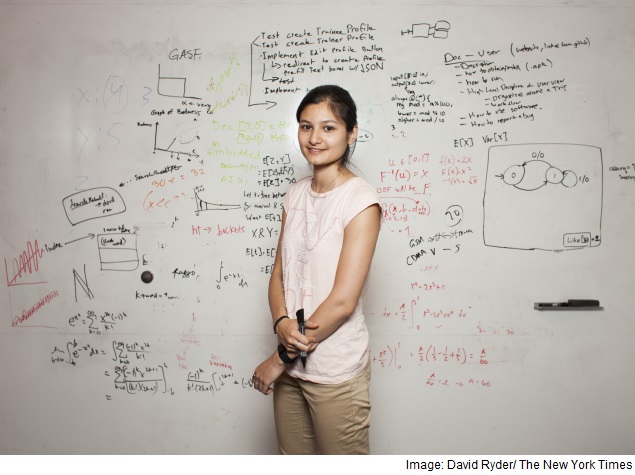 When Sonja Khan started college, she’d never thought of studying computer science. But when she heard from friends that the intro class was good, she decided to give it a try – and then ended up majoring in it.Four years later, she has just graduated with a computer science degree, is pursuing a master’s degree and is headed to a summer internship at Facebook.

“I didn’t even know anything about the field before; I had never considered it,” she said. “I signed up for it pretty much on a whim and really enjoyed it.”

Khan’s story reads like a dream for universities and technology companies – where only about 15 percent of computer science graduates and technical workers are women. The industry has been under pressure to recruit more. The difficult question, though, is how to encourage more women on paths like Khan’s.

Some colleges have made significant strides, including the University of Washington, where Khan is a student. Their methods offer lessons for other schools and companies hoping to increase the number of women in fields where they remain under-represented.

Behind the scenes of many of these schools’ efforts is an organization called the National Center for Women & Information Technology. It provides consultants to college faculties on how to change their programs to recruit and retain women. On Thursday, the centre is giving the University of Washington its first award, sponsored by Google, for colleges that have succeeded in this effort. The center hopes to give the award annually.

The university has done three big things to diversify its student base, Lazowska said. The first is to get girls interested in computer science early on, by teaching elementary and high school teachers and students about computing through workshops and field trips. These efforts have particularly large effects at state schools that recruit from nearby high schools.

Still, like Khan, many students, and particularly girls, are not exposed to the subject before college.

That is why the university gave its introductory courses a makeover a few years ago. The goal was to make computing more accessible and inviting to a broader range of people, Lazowska said. The courses showed students they can succeed through hard work and do not need esoteric knowledge or an innate gift.

The new program includes small group sessions with faculty members, classes that connect software programming to philosophy or biology and an emphasis on real-world applications. Forty percent of the teaching assistants are women, and there is a seminar on women in computing.

The University of Washington has also tried to build a sense of community for women studying the topic. It sends students to tech companies or conferences for women in tech to meet others in the field.

For Khan, there were several events that pushed her to continue in the major. A small yet critical one happened early on, she said: After she took the first introductory class, the professor emailed her to encourage her to take the next one.

The seminar on women in computing gave her a chance to discuss some of her insecurities about the field, she said. And as a freshman, she entered a hackathon with friends – despite being worried that she was under-qualified to enter – and won second place.

“Before, I kind of thought of computer science was potentially an isolating field where I’d work by myself all day, but actually you get to work with other people and get exposed to different ideas,” Khan said.

Her school’s efforts mirror what other schools have tried to do. Indiana University, which has used data to track efforts to increase women’s enrolment, won a second-place award Thursday from the National Center for Women & Information Technology. So did Michigan State University, which opened a lab for students to work together on computing assignments.

“It’s not just the sink-or-swim mentality, which in my humble opinion has been present in too much of computing education,” said Lucy Sanders, co-founder and chief executive of the centre.

Harvey Mudd increased its share of women studying computer science by doing things like including pictures of women in school brochures and hiring women students as campus tour guides. Carnegie Mellon, meanwhile, started a formal mentorship program for women studying the subject, since they were often excluded from male students’ informal networks.

The focus on recruiting and retaining women might increase their numbers – but it also singles them out, say some critics of programs that change curricula to attract more women or offer classes specifically for women. Students often say they want to be seen as a computer scientist, not a female computer scientist.

But Sanders says the American computer science curriculum is in need of a complete overhaul, not just for women.

“I don’t particularly think that the existing computer science curriculum has been effective for anybody,” she said. “It needs to be situated in a real-world or meaningful context so people understand why they’re doing it. That doesn’t make it less rigorous – students learn the same things, but in a different way.”