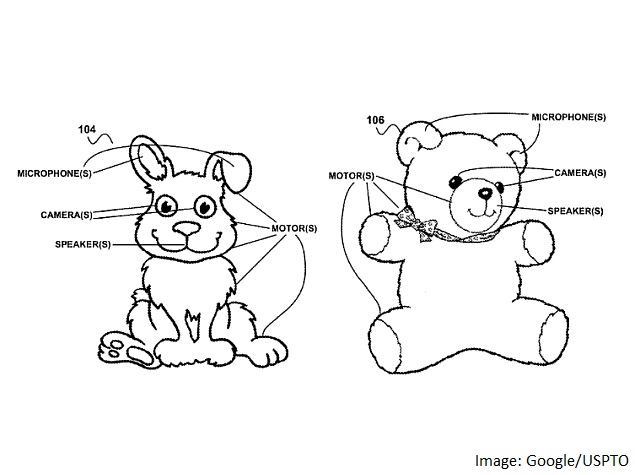 Google has filed a patent for toys that pay attention to who is in a room and can interact with other media devices.

The US Patent and Trademark Office shared diagrams Thursday depicting what resembled rabbit and bear toys with microphones in their ears, cameras in their eyes, speakers in their mouths and motors in their necks.

The envisioned devices were described as being able to listen for someone, turn a head to make “eye contact,” hear what they say and respond with pre-recorded phrases.

The toys would be able to wirelessly communicate using Bluetooth, Wi-Fi or other means with cloud-based computers or manage other media devices, perhaps turning on songs or movies at children’s commands.

Patent paperwork proposes that such a toy-like device could serve as an “intelligent remote control” that makes managing home entertainment or automation systems simple.

“The anthropomorphic device may be a doll or a toy that resembles a human, an animal, a mythical creature or an inanimate object,” the published patent said.

The toys could also be imbued with face and voice recognition, making the devices able to recognize who they were “looking at,” paperwork showed.

The Google patent listed Richard Wayne DeVaul and Daniel Aminzade as inventors. The application for the patent was filed in February of 2012.