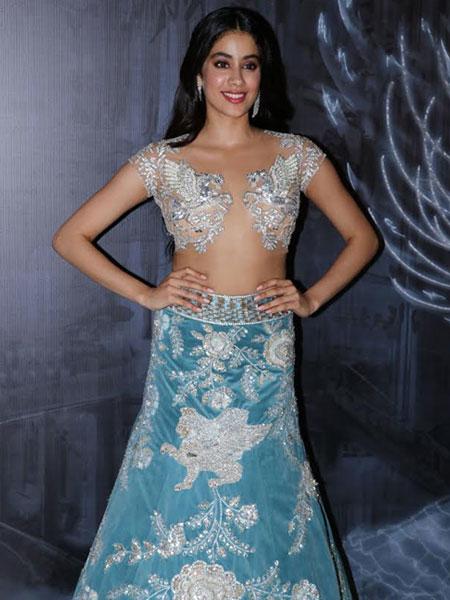 Janhvi Kapoor doesn’t shy away from showing off a little skin. In fact, judging by her Dhadak promotion style, one could argue that the actor always pulls it off. If crop tops ruled her recent looks, the star of the moment is making a case for sheer cholis now. Is sheer blouse the new bridal trend? Fashion designer Manish Malhotra thinks so. The ace designer has officially taken his love of sheer cholis to a whole new level with Janhvi’s bold blouse that could make even the most composed person blush:

Janhvi wears a barely-there plunging choli with a bejewelled bodice with consummate ease and confidence. Not only do you have to have the guts to risk a wardrobe malfunction, you must also do it with enough confidence that you look fierce — not terrified — in the photographs. Take Janhvi’s Manish Malhotra look from the designer’s Couture 2018/19 collection, Zween, show for example, which the designer shared on Instagram on Wednesday.

Janhvi had a regal addition to the modern-age bridal look that had us starry-eyed: An embroidered teal blue lehenga skirt embossed with oversized metallic gold and silver motifs. Another touch of fashion whimsy came courtesy of a pair of diamond earrings from Moti Jewels Palace.

We’re keeping an eye out to see who tries the revealing sheer choli trend next. As you know, where one celeb goes, there’s sure to be plenty more who follow. Interested in testing the sheer waters for yourself? We’ve got a few Priyanka Chopra, Deepika Padukone, Kangana Ranaut and Shilpa Shetty Kundra looks that’ll have you flashing skin without baring it all.