Need For Speed Payback and Vampyr will be available for free for PlayStation Plus members for the month of October. The company announced that the games will be available starting October 6 until November 2. PlayStation gives out free titles every month free-of-cost to its Plus subscribers and it looks like gamers would get a chance to race super cars or take control of a vampire with the available games this month. 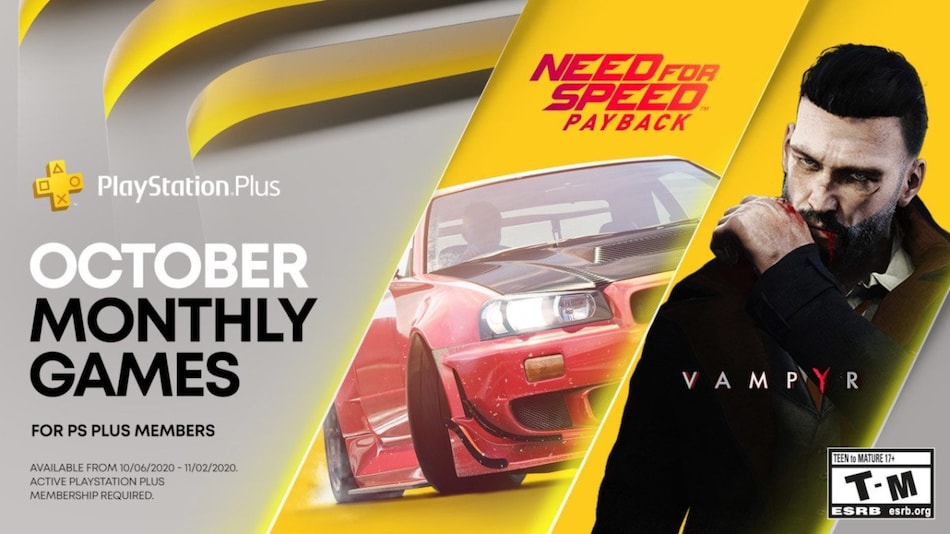 Once added to your library, the free PlayStation Plus titles will be available for download whenever you want. However, it must be noted that the games (downloaded or not) will only be accessible with an active PlayStation Plus subscription.

Released in 2017, Need for Speed Payback is the 23rd entry (if you’re still counting) into the popular racing franchise from Electronic Arts. It’s an open-world racer set in the fictional Fortune Valley that may remind you a lot of Las Vegas. You get to step into the shoes of three playable characters in its offline single-player campaign and engage in daring heists in Hollywood-inspired driving sequences. You can test your skills in ranked and unranked multiplayer races too. In our review, we praised the game for its gorgeous setting and impressive gallery of cars, but criticised its scripted chase sequences, excessive grinding-based progression system, and micro-transactions.

The title is available for purchase on PlayStation Store at Rs. 1,499.

The 2018-action RPG allows you to take control of Jonathan Reid, a doctor who was turned into a bloodthirsty vampire. You can choose to be a friendly neighbourhood demon, helping out the inhabitants of London with your newfound powers, or decide to let all hell break loose and do what a vampire does best – feast on unsuspecting victims. The third person adventure boasts of atmospheric settings, impressive superpowers, and an engaging story to boot.

Users can still download the free PlayStation Plus games from last month – Street Fighter V and Player Unknown’s Battlegrounds. The titles will be available for free downloads until October 5.