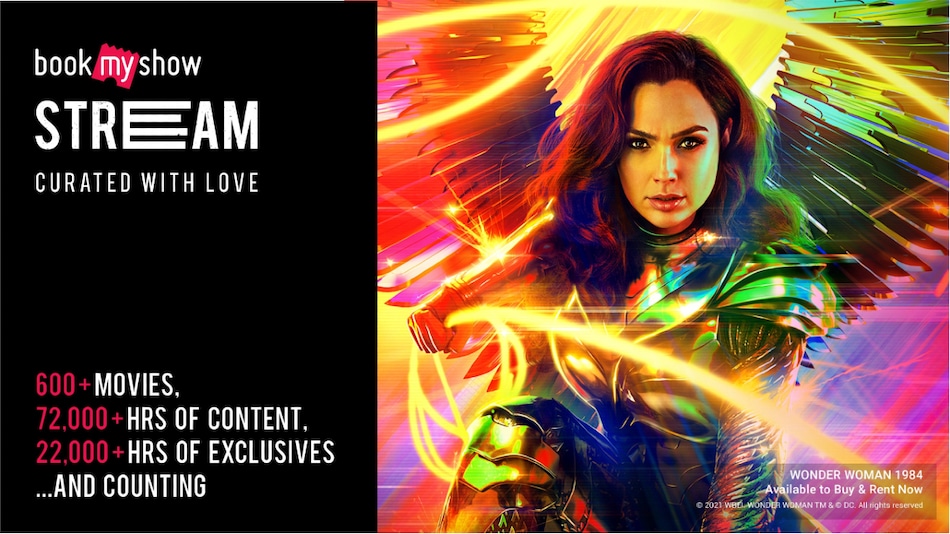 BookMyShow has now launched BookMyShow Stream — a new video-on-demand streaming platform. This marks the online ticketing platform’s debut in the transactional video-on-demand (TVOD) segment as COVID-19 pandemic continues to affect the entertainment business. Through this platform, users will be able to buy or rent the movies they want, including recent blockbusters that are still in the cinemas. Films on the new platform, like Tenet and Wonder Woman 1984 are also available on Apple TV and Google Play for streaming in India, and BookMyShow Stream could be another way to access these movies without going to the theatre.

BookMyShow Stream offers over 600 movie titles and 72,000+ hours of content that users can buy or rent and watch online. The platform will also feature multiple marquee premieres every Friday. This new online service looks to be BookMyShow’s strategic business move to stay relevant in these changing times.

Till theatres and cinema halls can run at full capacity and distributors can push more theatrical releases in the country, BookMyShow Stream video-on-demand streaming service looks to offer some respite. New titles like Tenet, Wonder Woman 1984, Yes God Yes, The Craft: Legacy can now be bought or rented at different prices. If you buy a movie or TV Show title, you can watch the movie any time after the purchase. However, if you rent it, which costs a little less, you will have access to streaming the title for 30 days but will have only two days to watch it once the playback has started. The video streaming quality is listed to be in HD. Different movies and TV shows are listed at different prices – Wonder Woman 1984, for example, is Rs. 549 to rent or Rs. 799 to buy, while Yes, God, Yes is Rs. 269 to rent or Rs. 549 to buy.

BookMyShow Stream, the company says, features a handpicked, specially curated library of over 22,000 hours of content exclusive to the platform at launch. The platform will offer services like Friday Premieres, Exclusives, World Cinema, Missed in Theatres, Festival Favourites, and dedicated Bundles that offer multiple titles together. BookMyShow Stream will be available for viewing on BookMyShow’s mobile app and website as also Apple TV, Android TV, Fire Stick, and Chromecast. BookMyShow Stream will allow users access to features such as downloads, offline viewing, and casting.

The company has partnered with Sony Pictures, Warner Brothers, and Universal Pictures for international content. It has also joined hands with major Indian production houses such as Viacom18, Shemaroo, Rajshri Productions, Divo, and Sillymonks to offer BookMyShow Stream users a variety of content. BookMyShow Stream is said to also be one of the first Indian streaming platforms to host acquired content from independent film distributors like PictureWorks, Superfine Films, Impact Films, Kahwa Entertainment, and VR films. Content from international film festivals like Cannes Film Festival, Venice Film Festival, Berlin International Film Festival, and Sundance Film Festival will also be made available to buy or rent.